We utilize 2 types of trellis systems 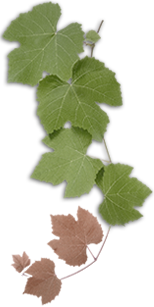 Ours is a small vineyard by most comparisons but it is big enough to provide us with wine to drink. We have approximately 360 vines. It now consists of 3 red varieties and 3 white varieties.

For additional details on our vineyard, please contact us directly. We love talking about vines and wines.

Where you can learn about vines and wines

Leave the stress of the city behind and come learn about the unique vines and wines of the midwest at Oak Haven Vineyard & Inn.

Vertical Shoot Positioning (VSP) is a training system used in conjunction with single or double Guyot, cane pruned training, or with a cordon, spur pruned system. VSP is very common in cool climate regions, with low to moderate vigorous growth, as it encourages better air flow through the vine. This is accomplished by keeping all the shoots growing vertically, with no vegetative growth below the cordon/cane. The increase in air flow helps prevent problems associated with disease, allowing the fruiting area to dry out quicker after rains.

With proper canopy management, the fruit is healthier, but being exposed to the sun earlier in the season, encouraging grapes to ripen more evenly within the bunch.

Cluster thinning, as well as harvest is generally easier, as access to the fruit is easier The objective of VSP is to train the shoots in a vertical fashion, creating a narrow layer that provides good sunlight exposure and air flow in the fruiting zone of the canopy. Each shoot is trained to grow vertically, in place, by attaching the shoot to movable catch wires. The shoots length can easily be controlled my pruning any vegetation over the top catch wire. The target for the fruiting zone is generally around waist-high, mainly for worker's convenience as the row are worked throughout the year.

High wire cordon (HWC), high cordon, single curtain, single wire cordon, high bi-lateral cordon, Hudson River Umbrella, and the list goes on… While the names of these systems may imply that they are different, for the most part they are regional names for a similar training system, though there may be some slight differences with fruiting spur/cane length and so forth.

As its name implies, it is a cordon system where the cordon is at the top of the trellis, usually 5-6 ft above the ground.  Typically this training system is used for cultivars that don’t grow strongly upright, such as most hybrids and ‘American’ cultivars.  It is a pretty efficient training system as far as trellis design goes as it only needs one wire for the cordon, and an optional (but recommended from my perspective) training wire halfway between the cordon wire and the ground.  The shoots are then trained downward during the growing season.